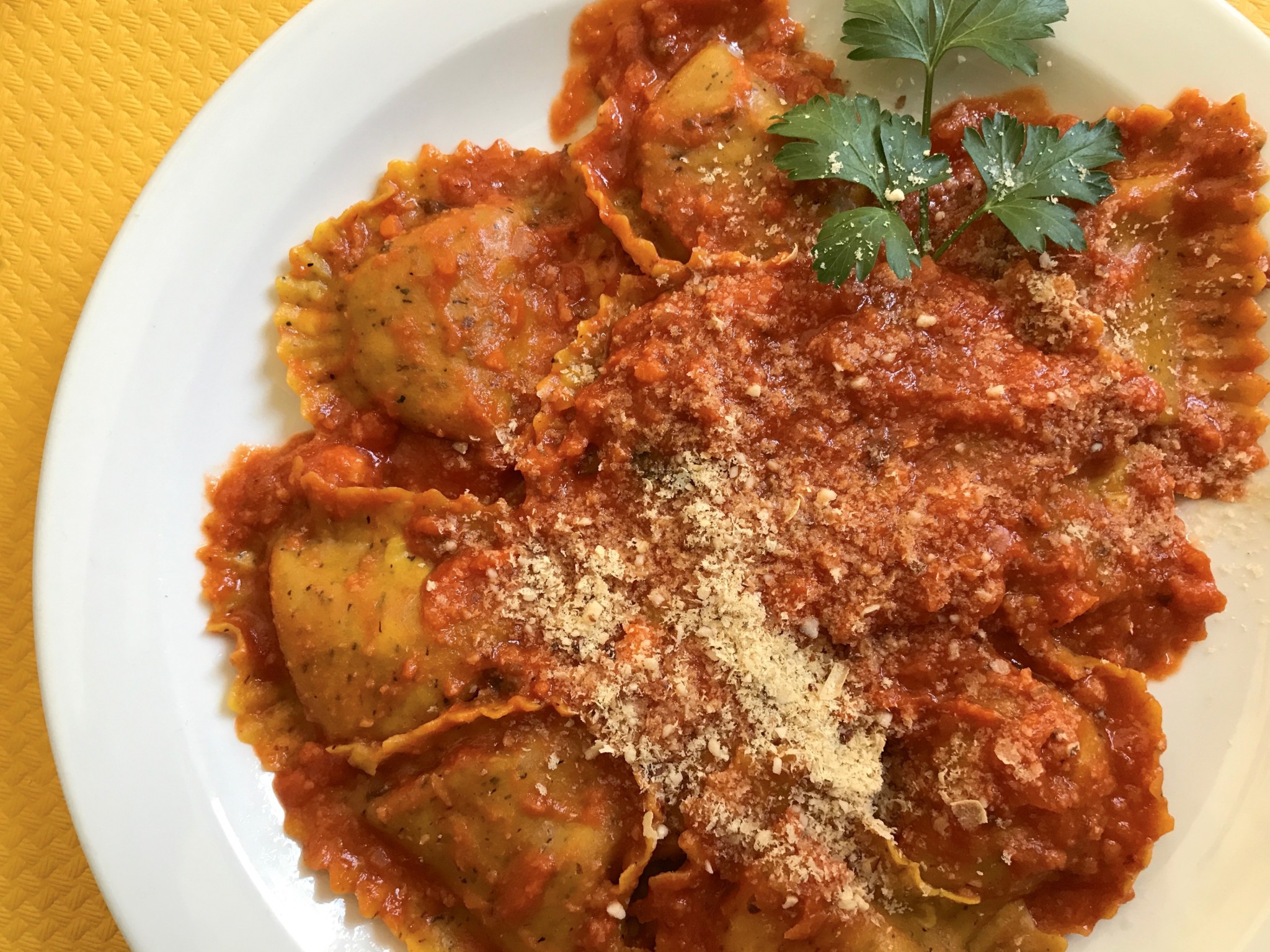 Turin may easily be the vegan capital of Italy! With a vegan mayor, more than twenty fully vegan restaurants and plenty of vegan options everywhere, the main reason for our trip to visit this northern Italian city with our friend Nicole was to eat all the things, and we did pretty much that, so that we could tell you where to get the best vegan eats in Turin! This is the key to rough opening times and prices for the guide, which will appear below the name of each restaurant or café mentioned.

Which meals are catered for

A rough price range (based on prices of mains)

Here is our vegan Turin guide with the highlights from our recent trip.

With a somewhat fancy interior design, this place serves good, solid food and also some of their own craft beer. The evening menu is more upscale, but we only visited for lunch where the options included mostly wraps, sandwiches and salads. It's a nice setting and the food is good, though perhaps slightly overpriced for what it is. The staff are friendly and welcoming, and it definitely doesn't feel pretentious despite the look. They also offer occasional specialised cooking classes. The one place in Turin that we visited every day we were there, this all vegan gelato place was so good! All the ice cream is made with a rice milk base and is free of refined sugar, as they use either stevia or coconut sugar to sweeten the flavours. The pistachio and gianduia (hazelnut and chocolate) were our favourites. There are also some cakes and readymade lollies for sale, and all ice creams can be made into a frappe. The staff were super lovely and though there's not a lot of space to sit, it still felt comfortable and inviting.

This colourfully designed joint over two floors serves some of the most beautiful vegan burgers I've ever seen with some wackily coloured buns. But worry not: the colours are all natural and plant based! The menu is quite simple but with a good range of types of patties based on chickpeas, seitan or vegetables, for example. Sides are thick cut fries which are the perfect compliment and the sauces in the burgers are tasty and moreish.

With a somewhat confusing menu printed in too many different fonts, this cosy little restaurant attached to an all-vegan shop was a definite highlight of the vegan scene in Turin. The pizzas look small but they are actually quite filling, and the cheese and cold cuts plate was a nice surprise! The real highlight here, though, are the desserts, which fill two massive displays. While it might be a bit confusing what everything is, and that there are no prices, all the things we tried were delicious, so I just suggest going with what calls to you! The first cat café in all of Italy, this bright, clean space is a great idea for a weekend brunch, when they offer an all-you-can-eat vegetarian buffet with lots of vegan options, which will be clearly pointed out to you by staff if you ask. It's very relaxed, and the six cats are pretty chilled out, so it's a fun place to come and hang out and take your time over brunch. The food itself is mostly cold items such as salads, pasta dishes, breads with spreads and a few sweet items. There are plenty of place for the cats to relax, but they may also come and climb on your table, which is not encouraged by the staff. Don't feed them! This super hipster bar with secretly vegan food (they barely advertise the fact) is a great place to come for an evening drink and snacks or even a meal. The cocktails, especially the gin-based ones, are impressive but expensive and are all vegan, though some of the wines may not be: just ask. The menu mostly consists of finger food, but there are some burgers and noodle dishes too. I found it tasty but much of it was rather oily. There are a couple of changing desserts, which were pretty good and satisfied my sweet tooth! As well as these restaurants, we were also surprised to find an abundance of vegan pastries all around the city. Almost every café we walked by advertised the fact that they had vegan croissants! Granted, not all of them had any left, or if they did maybe there was only one from the day before, but they were surprisingly easy to come by. We had some at the airport, Don Carlos Café Bistrot (right around the corner from Gelato Amico) and a few other places. These places usually had soy milk too. We didn't get to try another fully vegan restaurant in Turin, Chiodi Latini New Food, but we will definitely make it a priority to visit next time as it looks amazing!

Turin is a pretty walkable city, and apart from getting to and from the airport, we didn't use public transport there at all, though the tram and bus networks are easily accessible and fairly priced. Given that, much of the city centre is going to be a good place to stay. We stayed in the Aurora neighbourhood, just to the north of the main square and right by the canal, which was lovely.

There are many sites for apartment rentals in Turin, with AirBnB probably being one of the most popular. Prices are generally comparable to budget hotels, especially if you’re willing to get a room in a shared apartment. Book AirBnB →