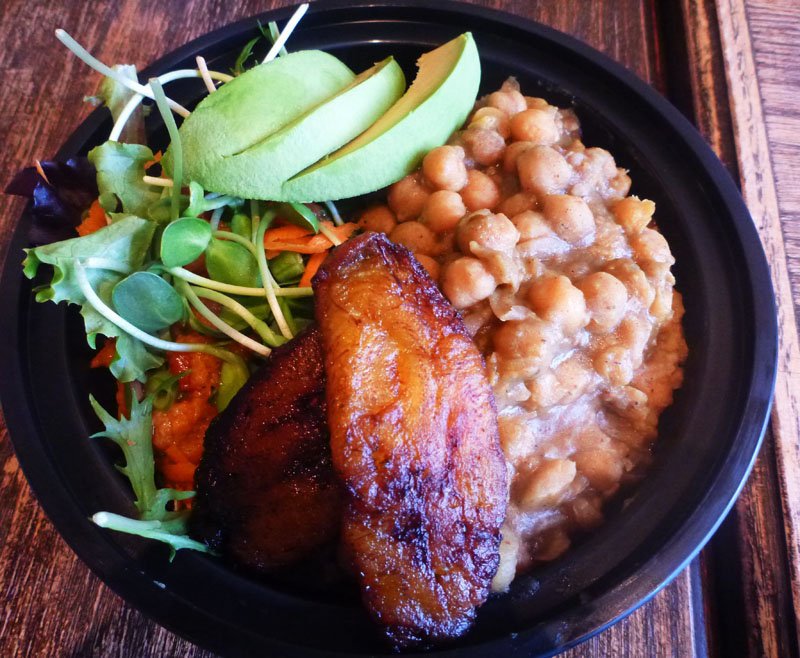 Vegan Food Tour of Toronto – Toronto is fast becoming the vegan food capital of the world with more and more restaurants sprouting around the city to cater to the ever-growing vegan community. Explore the Christie Parks neighborhood to taste some of the best vegan dishes out there. Taste food at carefully selected locales, hole-in the wall, family establishments to make sure you get an authentic and unique experience of the city and its vegan eats.

Toronto is one of the most multicultural cities in the world with a wide variety of ethnic restaurants. When it comes to vegetarian restaurants, this is no exception – we have a wealth of vegan food based on cuisine from around the world right in our own city!

From Chinese food to Mexican food, Indian food to Italian cuisine, we've got a restaurant for all tastes. Considering how close we live to the city (about a 10 minute drive) and how many times we've gone there, we've still yet to eat at every vegan restaurant in Toronto (and that definitely must tell you that Toronto is super veggie friendly!). Here are a few of my favourite places:

Fresh has a special place in my heart as being the first vegan restaurant that I ever visited in Toronto. They've been around since 1999, and currently have expanded having four different locations throughout the city. Fresh is first and foremost a juice bar, where you can get freshly squeezed juices. As for the food, they serve a variety of salads, wraps, soups and bowls – all very healthy, and all super tasty!  Fresh even has their own cookbooks that are available in store and online, so you can cook your favourite dishes back at home when you're away from Toronto. You pretty much have to get a smoothie while you're here. They're just so good!  If you've been walking around all day, these will surely quench your thirst as they are so refreshing. Whatever you decide on for your main dish, be sure to start off the meal with the quinoa onion rings and garlic mayo. They're a great little indulgence and the puffed quinoa around the outside makes them entirely unique. Justin and I visited One Love Vegetarian restaurant last year and I'm still dreaming about the food there! It is a Caribbean restaurant that solely serves vegan food, including bowls, roti and soup. We each had a bowl while we were there (Justin got a BBQ Tofu bowl, and I got a chickpea bowl) and it was hearty, satisfying and delicious. I loved the fried plantains on top, which made me dream about visiting the Caribbean during a cold day in Toronto. They also have vegan dessert there, too, and we couldn't resist their cupcakes! food at One Love

Disgraceland is a really fun bar and restaurant located near many of the museums in Toronto. So, if you find yourself pursuing some educational enjoyment during the day, you might want to relax and have some yummy food and drinks at Disgraceland. This restaurant is friendly to both omnivores and vegetarians, as they have almost the entire menu with the meat-version and the vegetarian-version alongside it. This would be a great place to go with friends who might not be as open to eating vegetarian food as there would be something for everyone! There are also free board games to play, as well as a pool table and a pinball machine, so you could easily spend hours here playing games with friends! We ordered two veggie burgers with fries, “popcorn” tofu (tofu done KFC style!), and vegan pierogis. There are plenty of different toppings to choose from for the burgers. If you're a fan of fries, there is an entire section of the menu devoted to fries. Visiting Canada and want to get one of our traditional dishes, poutine, but don't eat gravy or cheese? Fear not! There are a whole bunch of different vegan poutines to try! And if you're feeling like an alcoholic beverage, there is an extensive cocktail list and tons of different beers on tap.

Here are some of my honourable mentions of restaurants to try:

A vegan bistro serving Asian-fusion cuisine, near Kensington Market and Chinatown. We recommend trying the Pad Thai or the Sizzling Seitan in Black Pepper Sauce.

A raw, organic restaurant with some cooked options on the menu. One of Toronto's premier raw vegan restaurants with a popular line of raw food and snacks sold in local natural grocery stores in the area. The owners are very committed to the environment and creating healthy food for all to enjoy.

Toronto is also home to many vegan bakeries for those who have a sweet tooth. In many cases, the bakeries serve gluten-free baked goods as well, making them a great choice for anyone with food allergies. There is almost a vegan bakery in every neighbourhood of the city, so you shouldn't have a problem making it out to one for some treats while you're in Toronto! In many cases, you'll find cupcakes, pie, donuts, cinnamon buns, muffins, chocolate, and so much more.

Toronto's first eat-in vegan bakery and cafe offers fresh-baked (and raw) treats that radiate goodness, made with love in an eco-friendly, dairy-free, egg-free, casein-free, and refined sugar-free environment. You can also enjoy a warm beverage here, like a soy latte!

Through Being Cool Vegan Baking Co

Relatively new on the scene, Through Being Cool is known for their delicious vegan donuts in a huge variety of flavours, ranging from regular kinds like chocolate and cinnamon sugar to more elaborate tastes, like maple bacon, espresso, Earl Gray tea, and banana cream/peanut butter/chocolate! All of their baked goods are vegan and they also serve up tasty morsels like pizza rolls, cinnamon rolls, croissants, butter and lemon tarts, cookies and cookie sandwiches, lemon blueberry squares, brownies, and more. goodies at Through Being Cool

This bakery is 100% gluten-free and vegan and known for their delicious cakes and cupcakes. They offer different items seasonally, such as apple pies in the Fall, and Easter chocolate cream eggs (like the Cadbury's ones, only vegan!) in the Spring. They also offer freshly baked bread, cinnamon buns, muffins, and more.

They're well known around the Vegetarian Food Fair and Farmer's Markets, but recently opened their own storefront. Apiecalpyse Now has the best pies around, as well as other yummy vegan baked goods. Proceeds from some items go towards animal-related charities, too, so it's a win-win: eat yummy food, and help animals!

There are a couple of notable events in the city that cater to vegetarians, so if you're thinking of visiting Toronto, you might want to adjust your travel plans accordingly!

The Vegetarian Food Fair in Toronto is the largest vegetarian food festival in North America, and one of the longest running! In 2012, they estimate that a whopping 40,000 people came out to enjoy some delicious vegetarian goodness. The event will be celebrating their 30th year in 2014. The festival typically runs during the first weekend of September for three days (Friday-Sunday). This fair is a celebration of vegan food that attracts vegetarians and non-vegetarians alike. Many companies set up tables with tons of free samples, so you'll get to try out the latest and greatest new products. stalls at the Food Fair

There are guest speakers (last year, we saw Gene Baur of Farm Sanctuary speak!), events (a world record for weight-lifting was broken last year by a vegan bodybuilder!), cooking demos (we saw Chef Roberto Martin, Ellen Degeneres and Portia De Rossi's private chef cook for us!), music, and of course, lots of yummy vegan food to eat and buy. goodies at the Food Fair

Oh, and the Vegetarian Food Fair is 100% free to attend, so everyone in the city regardless of financial status is welcome to attend and partake in the celebrations! The event is hosted by the Toronto Vegetarian Association (TVA), which has been around since 1945! Justin and I visited Grasslands, an upscale vegan restaurant in Toronto. We had wanted to go to Grasslands for a while, but it tends to be more on the expensive side as it is a classy place with inspired meals created by their head chef.

The fixed price Veggielicious menu at Grasslands was $30 (£16.20) and included:

Shangri-La Hotel – this 5-star hotel is located in the center of the city offering perfect access to Toronto's main sightseeing, vegan restaurants and shops. They also offer vegan options in their restaurant as well as vegan high tea, which is served in the late afternoon. They offer a selection of vegan snacks and desserts, as well as vegan sandwiches.

There are many sites for apartment rentals including Airbnb and Vrbo. Prices are generally comparable to budget hotels, especially if you’re willing to get a room in a shared apartment.

The best website to browse before you visit Toronto is the Toronto Vegetarian Association's website. There are listings for all of the vegetarian, vegan, and vegetarian-friendly bakeries, restaurants, and cafes in the city, listed geographically and alphabetically, so you'll be able to plan according to where you'll be staying or visiting when you're here. You can also read about the many other events that happen in Toronto that are geared towards vegetarian cuisine.

There's also the ever-popular Happy Cow website and app, which does a great job of showing where all of the vegetarian restaurants are located, along with reviews!

All in all, Toronto is such an amazing and vibrant city, and to top it all off, it has so many vegan and vegetarian restaurants to choose from. You'll never go hungry visiting Toronto!

Lauren is one half of Justin Plus Lauren, a travel blog that she writes with her boyfriend, Justin. These two Canadians have traveled throughout North America so far, and hope to slowly travel all over the world. Both Lauren and Justin are passionate about veganism and seek plant-based meals wherever they go. They share a love for photography, video editing, enjoying new adventures together and sharing their stories. They also blog about their cute kitten, Chickpea. Follow them on Facebook, Twitter, Youtube, Google+ and Instagram.