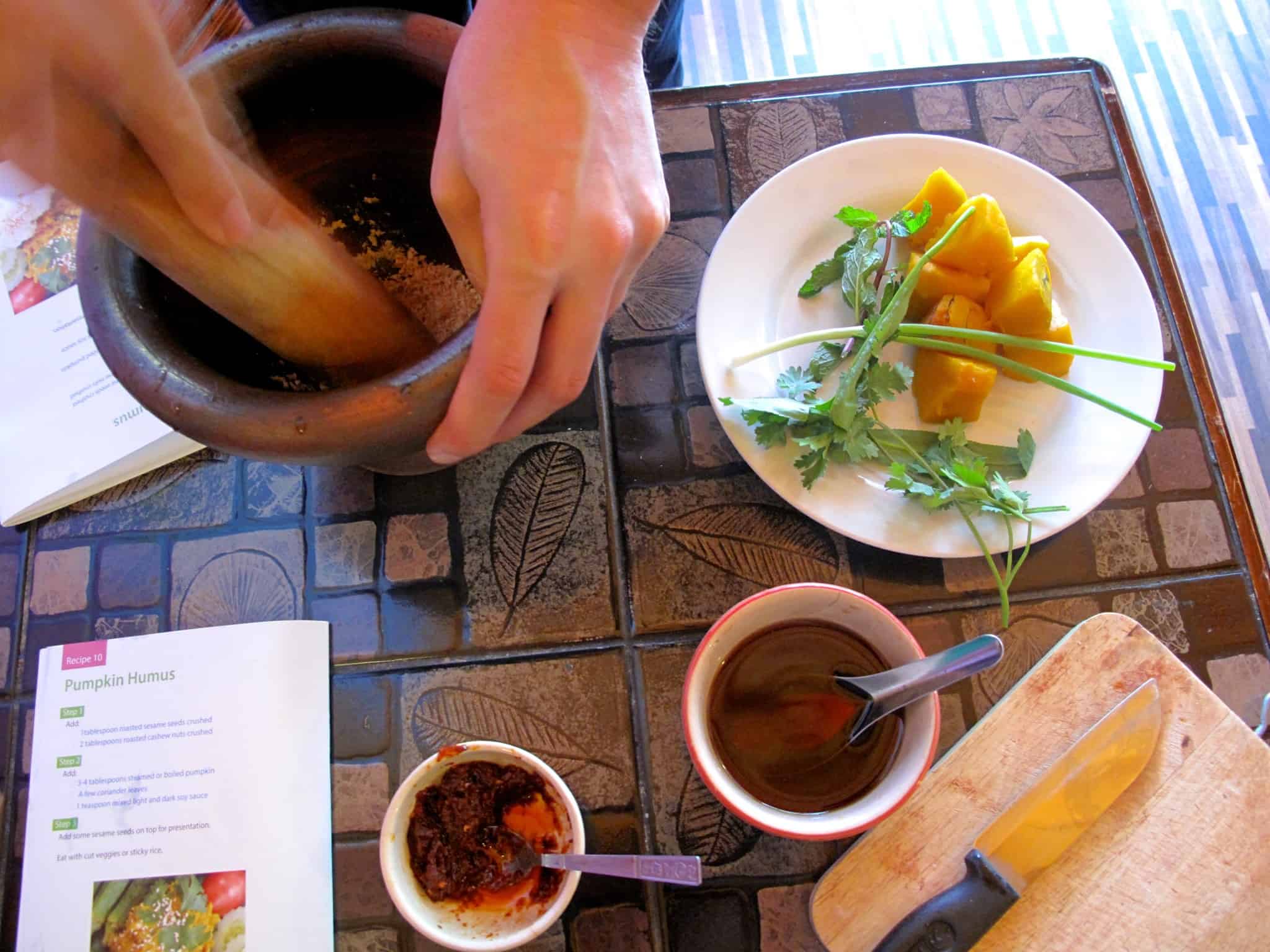 Coming to Thailand, one of the things at the forefront of my mind to experience and get familiar with was the food. Thai food is a relatively easy cuisine in which to find vegan options, assuming you can avoid fish sauce and egg (milk products are almost never used in traditional Thai cooking), so I was keen to try my hand at cooking up some vegan Thai dishes myself. And to get Zab in the kitchen for once, too!

After some research, we discovered the place in Chiang Mai that everyone was talking about to do a Thai cooking class: May Kaidee. Started in 1988 by the eponymous May Kaidee, chef, entrepreneur and traveller, in Bangkok, there is now a branch in Chiang Mai just outside the Old Town that presents itself as a vegetarian restaurant, but also gives cooking classes.

Nim, a friendly Thai woman from the Isaan region in the north east of Thailand, teaches classes there every day, and she welcomed us enthusiastically at 9am sharp to start our morning of cooking.

Once we had donned our aprons, but before starting to cook, Nim tested us on whether we could identify a plate of roots, leaves and fruits that we’d be using in many of the recipes to come that day. I was able to identify all but the mysterious, leathery leaves. We then started out making red chilli paste from scratch that we would later use to flavour several of the subsequent recipes. This consisted of oil, tomato, onion, garlic, cumin powder, dried chilis, galangal root, lemon grass, kaffir lime leaf, soy sauce, lime juice and brown sugar fried together and then blended. We were then invited to taste it by scooping out of the bowl with slices of cucumber. I cautiously put it in my mouth, water and extra plain slices of cucumber at the ready to quell the inevitable fiery explosion. To my surprise, though it wasn’t all that spicy. Zab was especially excited to learn how to make peanut sauce (satay) as he’s had an inexplicable affinity for anything using peanut sauce since he was a teenager. I now expect to be served satay everything once we’re back home! Throughout the class, I greatly appreciated Nim’s approach to cooking in such a way that the recipes should be made to suit our tastes. Add a little more coconut milk here, a little less sugar there, a couple fewer chills than the recipe states, if that’s what we thought it needed.

We also enjoyed her insistence on using a “Thai lady hand” as a standard measurement of vegetables, something which Zab needed to adjust to, given that his hands are definitely not Thai lady sized!

I also very much enjoyed mining Nim’s knowledge on ingredient substitution. She was clearly aware that there might be some ingredients that students of the class may not be able to so easily find in their home country, so she had an answer for everything. Replace lime juice with rice vinegar if you can’t get fresh limes. Use gluten free soy sauce in the place of light soy sauce if it isn’t available where you live. Try cooking with coriander root if you can’t get your hands on galangal root.

Once we’d finished with the dishes requiring cooking, we got to sit down and prepare a few things that didn’t require the use of a wok. First was pumpkin hummus, a slightly adapted version of a typical recipe from Nim’s home region of Thailand.

Instead of cooking over heat, this required a lot of grinding with a pestle and mortar, so we put Zab to work.

The result was smooth and creamy, served as a dip. We both liked it a lot, but it didn’t contain the flavours we’d become so used to experiencing in the dishes we’d made so far that morning. No lemongrass, no galangal root, no coconut milk, no chilli. This recipe had cashews, sesame and fresh coriander instead.

We also made a simple version of green papaya salad including carrot, apple, cucumber, green beans and tomato topped with lime juice and roasted peanuts which was wonderfully fresh and spicy. Finally, everything was topped off with mango and banana with black sticky rice and coconut milk. Pure decadence. We cooked so much food during the four hours we were at May Kaidee’s that we could barely eat it all. Fortunately, Nim was happy to package it up for us to take away, meaning we had leftovers for a couple of days following the course and got to properly enjoy the efforts of our kitchen time at home.

The whole experience of taking this cooking class with Nim was a delight. We both left feeling inspired and with a renewed enthusiasm for and appreciation of Thai food. The main thing we realised from doing this was that Thai cooking is actually quite easy once you have the right ingredients. I see a lot of home made massaman and green curries in our future!

Many thanks to Jo for inviting us to take the class, and to Nim for guiding us so expertly through everything! All opinions, as always, are our own.