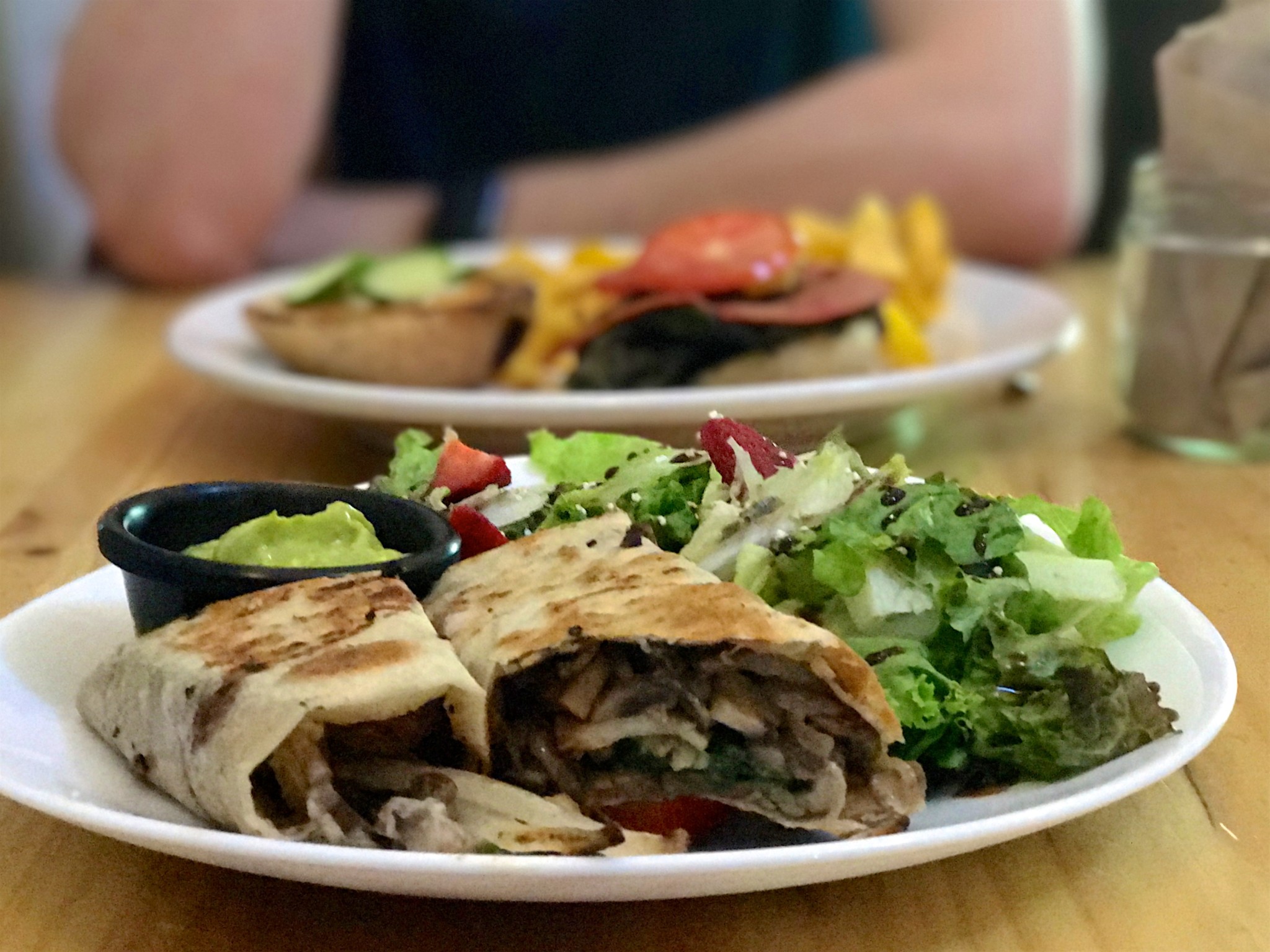 Being vegan in Guadalajara is easy. Though it clearly doesn't have the concentration of vegan restaurants that Mexico City has, it has several great options, most of which are within relatively easy walking distance of each other. Outside of these places, the concept is quite well understood, and restaurants and cafés are usually happy to accommodate your needs if you just ask. Nonetheless, there are some excellent places worth visiting for eating vegan in Guadalajara. This is the key to rough opening times and prices for the guide, which will appear below the name of each place mentioned.

Which meals are catered for / opening times

A rough price range (based on prices of mains)

Here is our vegan Guadalajara guide with the our favourite places to eat in the city.

Run by a local who lived for many years in Québec, this fully vegetarian place serves poutine, a typical Canadian food, with a Mexican twist. Most everything on the menu has a vegan option, as they make their own vegan cheese in house. They also have a few burgers which are small but tasty. It's set inside a small, independent food court so the range of drinks is quite large as they can bring you things from the other vendors. They sometimes also have vegan ice cream. One of the best vegan restaurants I visited in Mexico, this place set inside what used to be a house has excellent food. The menu is not huge, but it is diverse, mostly serving European style food. There are pizzas, wraps, burgers, salads and of course cauliflower wings, as well as heartier meals such as portobello wellington and lasagne and a few raw options. The pizza is thin but dense and smothered with melty sunflower and almond cheese that they make themselves. The desserts are also definitely worth coming for, with the tiramisu being a definite highlight. A great option for something a bit special and you feel like splurging a little. Though it's not marked clearly on the menu, almost everything at this vegetarian restaurant has a vegan option except the nachos and cheese fingers. Food is Mexican comfort food including burritos, chimichangas, burgers and sandwiches. It mostly feels like a bar, but it's a good place for a snack with some drinks if you're not super hungry, but you could also get a full meal here. There are various special offers throughout the week that get you two for the price of one on different menu items.

Almost everything at this simple vegetarian lunch place can be veganised: just ask when you order. The falafel and hummus is decent and comes in several forms. There's also a falafel burger which makes for a more hearty meal. Everything is freshly made and served with a smile. There are also several vegan desserts, including a nice vegan brownie and a few coconut based ice creams. While you can sit there and eat, most people order to take away, and unfortunately everything is served on disposable plates even if you eat there. A good option for something cheap, tasty and not Mexican! This extensive vegetarian buffet is mostly vegan, but some of it will not be obvious so just ask the friendly staff who will happily point out the vegan options to you. The all-you-can-eat buffet with salad, soups, hot dishes, pasta, rice, potato, juice, water and even coffee included is excellent value if you're hungry. It gets busy around 2pm and there is often live music played in the covered courtyard area which makes for a pleasant if crowded setting. It also has a small shop selling some organic and vegan items for the kitchen.

Run by a sassy and clearly very passionate owner, this small street food style place with seats made of pallets serves a wide range of simple Mexican food, made vegan. Portions are generous, especially the tacos which were bigger than at almost any other place we ate, and there are plenty of extra toppings to help yourself to. With multiple types of tacos, a difficult to eat but oh-so-tasty burger, deep fried empanadas and more, this is the place to grab some cheap and satisfying meal or snack. There are some fantastic looking vegan cakes too, but we left too full to try them! All served on traditional Jalisqueño ceramic plates, everything is served beautifully. Ingredients are clearly fresh and care is taken to ensure its quality. There are a few desserts and some lovely juices too. The only potential downside is that it's right on a busy and noisy main road, meaning you probably don't want to sit right by the street.

Popping up only at the regular weekend evening market at Plaza Expiatorio, this popular food stand serves simple but delicious seitan and soy based tacos. There are several sauces to help yourself to, which are marked according to level of spiciness. Great for a late night snack or light meal at this lively market. Here’s a map of all the places listed in this guide:

There are many sites for apartment rentals including Airbnb and Vrbo. Prices are generally comparable to budget hotels, especially if you’re willing to get a room in a shared apartment.